Down In The Den was released on July 24, 2020 and good press and radio play has been coming in:

“A major league bass player, producer, songwriter and singer … making the kind of music which lives forever. … [Kamp has] a wisdom in what he writes and a stone-cold vocal strength in everything he sings.” — Americana Highways

Get the record on your preferred music service >>

Down in the Den marks Ted’s 12th record as the artist and frontman, and it’s a 14-song record featuring Ted’s bass playing, singing and producing. Some familiar names in the Americana genre add their talents and voices: Gordy Quist of the Band of Heathens, Matt Szlechetka, Brian Whelan, Brian Wright, Eric Heywood, Sarah Gayle Meech, Kirsten Proffitt, and more.

Ted recorded the record mostly in L.A. in his home studio, The Den, with Ted producing and engineering. Some individual songs were started in Santa Monica (Jim Doyle Audio), Helsinki (E-Studio), L.A. (Station House and Hollywood Sound) and Nashville (16 Tons).

Originally planned as a Memphis Southern soul record, it then grew to be more eclectic and includes more intimate singer songwriter moments as well as soul, gospel and rock influences. Some of the guest vocalists include Shooter Jennings (on Home Sweet Hollywood), Gordy Quist (on Hold On), Shane Alexander (on Only Son), Sarah Gayle Meech (on Word For Word) and Kirsten Proffit (on Take My Song With You).

Electric Guitar – John Schreffler (about 1/2 of the songs)

Drums – Jamie Douglass (about 1/2 of the songs)

Mixed by Ted and Mark Rains

Mastered by Mark Rains at the Station House (Echo Park)

8 of the songs recorded by Ted Russel Kamp in The Den (L.A.) except: 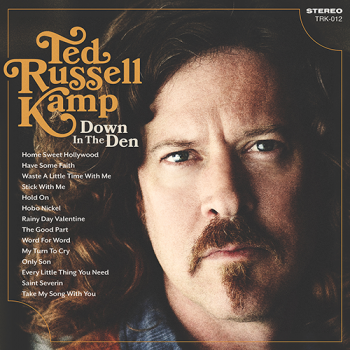